The Test Case of the Genetically Engineered American Chestnut

The American chestnut, once a dominant species in eastern North American forests, was decimated in the first half of the 20th century by a fungal blight (Cryphonectria parasitica, also referred to as chestnut blight) and logging. Researchers at the State University of New York College of Environmental Science and Forestry are developing a genetically engineered (GE) blight-resistant American chestnut (AC), and hope to win government approval for its unregulated release into the environment. If they are successful, the GE AC will be the first GE forest tree species planted specifically to spread freely through forests. Once the GE AC is released, there will be little potential to track or reverse its spread. 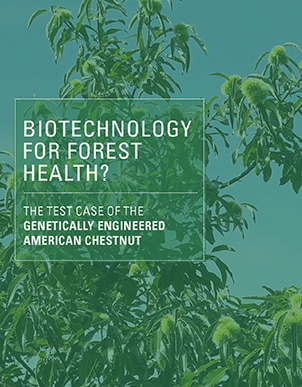