The false promises of cellulosic biofuels

Although the world’s first commercial wood to ethanol plant opened in South Carolina one hundred and eight years ago, more than 99% of biofuels worldwide are still made from plant oils, animal fats and sugars in starch (mainly from cereals, including corn), and not from wood. Despite massive subsidies and other state support measures, the most abundant sources of sugar and energy in plants, found in the cell walls of plants, remain beyond the reach of fuel refiners.

This report looks at the history, the technologies and the experience of refineries where cellulosic ethanol production has been attempted. The technical challenges remain, suggesting that there is little likelihood that large new markets for wood and energy crops for biofuels will emerge any time soon. The illusion that cellulosic biofuel production has dramatically increased recently reflects a redefinition of “cellulosic” to include transport fuels made from landfill gas, biogas and corn kernel fibre. Even though large-scale production of cellulosic biofuels appears destined to fail, the development of risky genetically engineered (GE) trees, crops and microbes associated with this quest introduces imminent and serious risks. 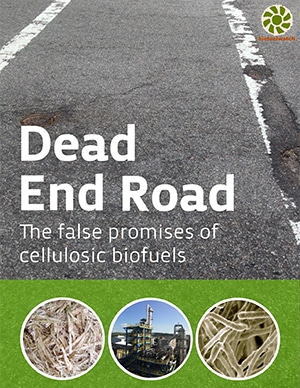