The Power of Grassroots Organizing 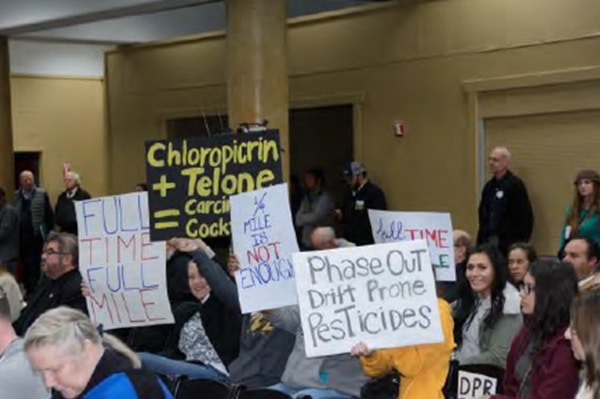 When the California Department of Pesticide Regulation (DPR) announced their long-awaited draft regulation to protect schoolchildren from exposure to agricultural pesticides, the Safe Ag Safe Schools (SASS) coalition in Salinas pressured DPR to ensure that a public hearing was added to the roster of events, allowing community members the chance to share their perspectives from the home community of a deeply agricultural region.

Chemical industry supporters showed up with “Science not Fear” stickers on their lapels, ready and eager to discredit our testimony. But once SASS’s comment train started rolling, it was clear that we were prepared to deliver the science, while the opposition was pushing the fear. The opposition speakers failed to cite a single scientific study and were left flustered and speechless by the onslaught of evidence, which lasted well into the night.

The evening was a triumph for the power of grassroots organizing. SASS turned out 350 people to the hearing, 70 of whom testified. We mobilized more than 1200 written comments, and garnered dozens of media pieces. But much more importantly, we turned up the level of confidence and commitment in our community members, who learned firsthand the power of truth and the strength in numbers.