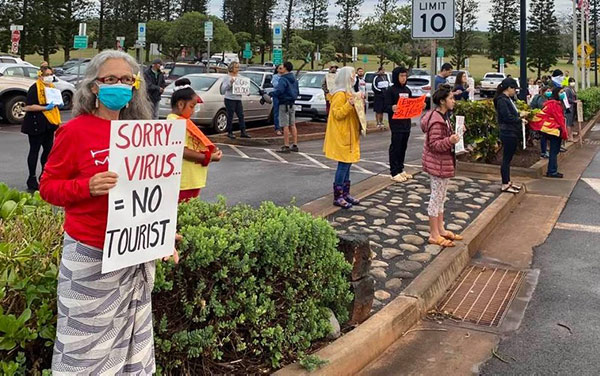 When COVID-19 first hit Hawaiʻi in early March, our team immediately took steps to prepare for the virus to hit Molokai’s shores, foreseeing that it would negatively impact the island’s access to essential items. Noting that the virus disproportionately affects elderly, indigenous and Pacific Island communities, and that Molokai has few medical resources on island, we saw the need to take action early and help prevent the spread here.

In speaking with the community about major COVID-19 concerns, we found many were worried about the continued arrival of tourists. As such, our fellows led a series of letter writing campaigns and helped mobilize several community protests at the Molokai Airport to oppose the continued arrival of tourists. Despite lock down orders in most states being in full effect, we continued to get tourists flocking to Molokai in an attempt to safeguard themselves from the virus, putting our vulnerable community at extremely high risk. Our efforts were successful, and we got Makani Kai airlines, one of the major inter-island airlines, to cease all non-emergency flights to Molokai, with other airlines soon following suit.

In addition to helping end the continued arrival of tourists, our staff and fellows also overhauled efforts towards local food production. Recognizing that Molokai’s already delicate food system was more vulnerable in light of COIVD-19, we saw a major link between our goal to restore Kaʻamola and the community’s need for increased local food production efforts. As such we had all staff, with support from fellows, prioritize getting areas in Kaʻamola planted to start food production, even on a small scale. Prior to the outbreak, one of the projects we were working on with the fellows was clearing a 1-acre parcel for a community food garden. With communal gatherings on hold due to the virus, we shifted course with the garden and transformed it temporarily into a space to grow produce that could be given (at no cost) to those in need, particularly elders. In addition to the 1-acre community garden, we also cleared and prepared several other garden areas on our site, growing both traditional and nontraditional food crops for consumption and medicine.

When COVID did finally reach Molokai, the first confirmed cases were all employees at the island’s main grocery store, which was promptly closed down. With only smaller shops left to provide the community with resources, and no central market to store goods, Molokai saw an instant depletion in resources. Were it not for the community’s strong family mentality, subsistence skill set, and local food production efforts, the situation would have been dire. Fortunately, our organization and several others on island have been able to step in and fill needs. Not only have we been able to give produce from our gardens to community members, but we have also been able to assist in making hot meals to pass out, making use of locally sourced ingredients and working to provide nutritious meals to the most vulnerable.