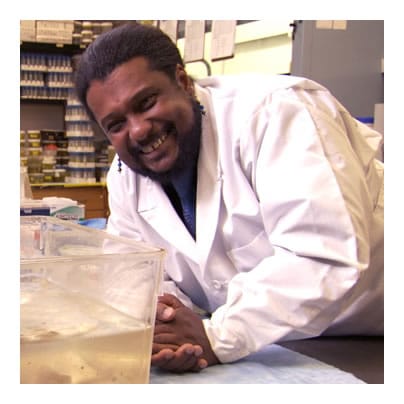 Ceres Trust provides support for the research of independent scientist Dr. Tyrone Hayes through the Beyond Pesticides Fund for Independent Science.

“Dr. Hayes was thirty-one when he first started studying atrazine. He was a promising researcher who had come to academia from atypical circumstances: he grew up in a poor, segregated neighborhood in South Carolina and later won a scholarship to Harvard, but didn’t feel at home in the élite circles he suddenly found himself in. Perhaps as a result, Hayes has been vehemently outspoken in his ongoing battle with Syngenta, and hasn’t always fit in among the polite protocols that often govern such debates.” –New Yorker

Silencing the Scientist: Tyrone Hayes on Being Targeted by Herbicide Firm Syngenta, a piece done by Democracy Now!

In this short documentary from the New Yorker, The Biologist Who Challenged Agribusiness, Hayes returns to the neighborhood where he grew up and discusses his winding life path and what drives him to keep fighting his long, uphill battle.

Below please find an excerpt from a recent article (and journal article) that highlights Syngenta’s attacks on Dr. Tyrone Hayes, and why that is a threat to independent science the world over, Fighting Attacks on Inconvenient Science—and Scientists The atrazine wars offer a cautionary tale for scientists whose work triggers blowback by regulated industries, and lessons for protecting scientific integrity.

“What’s most concerning about the tactics, said Stephan Lewandowsky, chair in cognitive psychology at the University of Bristol, “is that not all universities and not all academics are willing or able to resist those attacks and attempts to bend science to an industry’s interest.” But publishing stories like the atrazine saga, Lewandowsky said, should help well-intentioned academics and universities learn how to spot industry-sponsored “influence operations.” Rohr said he’s “very grateful” to Hayes for speaking out, and for taking a lot of the flak. Hayes, for his part, is grateful that his story—now being developed into a movie—is before an audience that includes Novartis, Syngenta and “all of the players” involved in the campaign to defend atrazine.”