Since 1905, Richmond was a virtual Chevron plantation where economic, political, and social domination by the firm seemed complete and invulnerable. Chevron is one of the largest corporations in the world, and its refinery in Richmond is one of eleven refineries owned by various fossil fuel corporations in the state, making California the third largest refinery state in the US. Chevron’s political domination of Richmond was replicated at the statewide level, with outsized influence in the state legislature, as well as at the state’s primary environmental agency related to concerns due to refineries – the California Air Resources Board (CARB).

For decades a pro-Chevron majority controlled the Richmond City Council, and for many years, even dominated the local school board and community culture (the local public high school team is called “The Oilers”). This control had allowed Chevron to become the largest industrial polluter in California and the state’s largest single industrial emitter of greenhouse gases. Chevron’s control was so complete that for many years they were provided a favorable tax rate by city council.

All of this began to change in the new millennium. One of the first indications of this change was the passage of a local ballot initiative entitled Measure T, that significantly increased Chevron’s taxes to the city of Richmond. This measure passed despite strenuous and costly opposition from Chevron and its business allies and was in indication that a new day was indeed dawning in the city that had been the original home to “Rosie the Riveter”. This defeat was largely the result of important changes that had occurred in Richmond. The most important of these was the emergence of a new demography in Richmond and the persistent organization of local grassroots organizations. 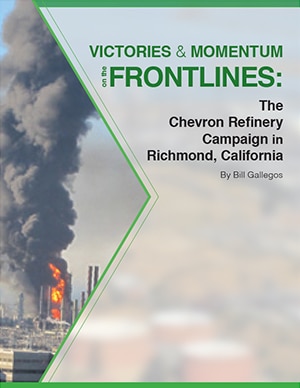