When we learn about the huge use of chemical sprays in the industrial agriculture of our region we can’t help but wonder. Some of us wonder simply because our sense of logic tells us this can’t be good. Others of us wonder because we have very personal and pressing reasons. Beverly St. John certainly has her reasons.

Bev moved to Waubun, MN in 1980. She had been raised on a small family farm in southern Wisconsin as the only Ojibwa girl in a county of German farmers. There, her family had milk cows and grew a cash crop for Green Giant. Her even deeper roots go back to life in the forests of northern Ontario, on her mother’s side, with great stories of a guiding and trapping life to be told from that.

In Minnesota, Bev raised five kids and this wasn’t easy because she lost her first husband to the war in Vietnam. She’s been a single mother most of her life. It was this family life and the ten grandchildren which followed that made her think about the chemicals and pollutants experienced in rural living.

Reading the report Kids On The Front Line really brought that home. She learned about the mechanisms by which infants and children are affected and about the chemicals which are traceable to specific illnesses. And, that took her back through her own family history with the cancers that have followed. Her father’s side shows a lineage of leukemia. They were the farmers also. There were six brothers, and one or two from each of those families developed leukemia.

The story that will still bring her to tears is the cousin whose daughter was diagnosed with leukemia at only four years old. This little girl was treated for years and the family fought it and fought it. But when the daughter turned 18 she simply said, “I’m done.” She was now old enough to make that decision, and she did, and that was the end.

Cancer losses are common in Bev’s life, and now she lives with it personally. She was diagnosed with leukemia in 1998. Beverly St. John became alerted to agricultural chemicals through concern for the future of her family and for children in general. Ask Bev what are the values that matter to her most and she will give her answer right away, “Family and Culture“. Then, ask what goals she has for her recent retirement and the answer is just as sure and strong. “I want to be as effective as I can be.” She acts on her concerns about illness and the environment through participation in the citizen’s group Toxic Taters. She is willing to confront the justification for agricultural chemicals. She is willing to challenge industrial growers who rely on herbicide and fungicides like a crutch. And, she does this because she is moved by a love of her culture and by a living compassion for the future of everyone’s children. 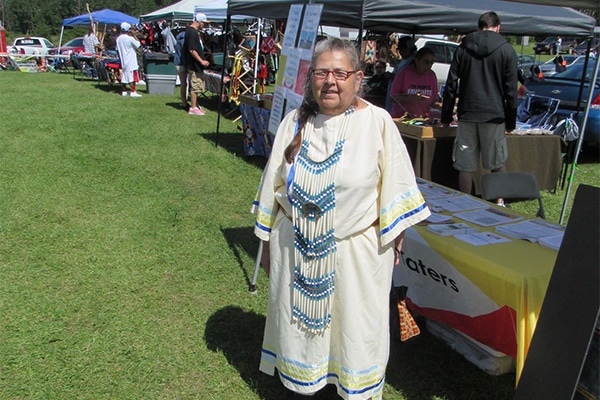